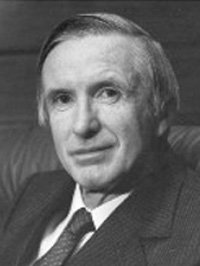 The Hon. Trevor Rees Morling QC passed away peacefully at his home on the 2nd of August 2020. He was in his 92nd year.
In addition to a very distinguished legal career Trevor Morling was the Chairman of the Australian Disputes Centre and was for many years a judge of the Federal Court of Australia. He also held commissions as an appeal judge in Tonga, Vanuatu and Western Samoa and was a long‐serving Chairman of the Australian Electoral Commission. After retiring from the Bench, Trevor, always an enthusiastic traveller, was actively engaged as a mediator arbitrator in Europe as well as in Australia.

As a young man, Trevor thought he would be a school teacher. He attended the famous Fort Street High School, whose alumni has produced some of Australia’s the most illustrious legal practitioners including his old friend, The Hon. Bob Ellicott AC QC. What really drew him into the law was his attendance at the Darlinghurst Taylor Square courthouse. He liked to sit at the back for several hours and amuse himself at no expense, watching criminal trials run. Little did he know it would lead to a fruitful legal career for the next 50 years.

On graduation from the University of Sydney, Trevor began his rewarding career in the law. He married his much loved wife Ruth in 1955 and had three children, Robert, David and Elizabeth. He went to the Bar in 1951, joining 10th Floor Selborne Chambers. In 1968 he took silk at age 40, making him the youngest Queens Counsel at the time. He was then appointed to the Federal Court of Australia in 1981 and became a Life Member of the NSW Bar Association in 1996.

Over the course of his career, Trevor was well known for presiding in the Royal Commission inquiry into the convictions of the Chamberlains, exonerating both Lindy and Michael Chamberlain in 1987. Many other important cases followed.

Former Federal Court Judge,the Hon. Roger Gyles, QC, said: “Trevor was not flashy or flamboyant in or out of court. He was more interested in a sensible result than in making new law. He was understated with a warm personality. He always ready for a chat, particularly if it involved some barristers’ gossip”.

Trevor has often been referred to as a pioneer of mediation in NSW and was a highly valued Director and Chairman at the Australian Disputes Centre. As a strong proponent of mediation and its success, he believed it provided disputants with a better understanding of the issues in dispute and therefore a better understanding of the risks they run if the case goes to trial. He referred to it as a worthwhile exercise for any disputants trying to resolve their matter efficiently.
The Australian Disputes Centre CEO, Deborah Lockhart echoed these sentiments in recalling Trevor’s regular pop-ins to the Centre for a cup of tea and a chat: “Trevor had retired as Chairman of the ADC in 2012 and from his mediation practice not long after, but he always remained interested and engaged in the work of the Australian Disputes Centre and the ADR industry. He was always remarkably generous with his counsel and guidance in furthering the interests of the ADC and the practice of mediation”

At his retirement from the bench in 1993, then president of the NSW Law Society, Mr John Nelson, described Justice Morling as a “man of sensitivity and compassion”. The then president of the Australian Bar Association, Mr John Coombs, QC, remarked on his “reliable, sometimes wicked, sense of humour”.
Trevor’s legacy in the Australian legal system and his significant contributions to international and domestic ADR will be long remembered and respected. Vale Trevor.