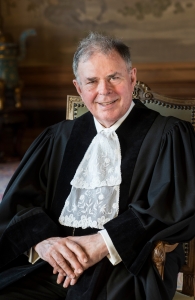 James Crawford is only the second Australian to hold the prestigious position as a Justice of the ICJ, following in the footsteps of Sir Percy Spender KCVO KBE QC who served from 1964 – 1967. Before joining the Court in 2014, James Crawford’s distinguished legal career includes acting as a barrister, expert or arbitrator in more than 1,100 cases, many of which he was appearing as counsel before the ICJ. In addition to his is advocacy work James Crawford is an eminent academic serving as Whewell Professor in International Law at the University of Cambridge and Challis Professor of International Law and Dean of Law at Sydney University. His Excellency was responsible for work on the Draft Statue for an International Criminal Court (ICC) and International Law Commission (ILC) Articles on State Responsibility while serving as a member of the ILC from 1992-2001.