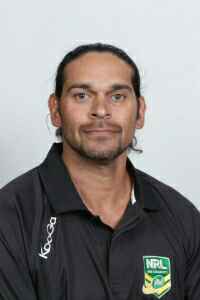 In May 2014, the Australian Disputes Centre launched its Aboriginal and Torres Strait Islander Mediation Training Scholarships Program, an initiative that offers indigenous Australians the opportunity to be trained to the national mediation standards.

The aim of the program is to promote mediation as an alternative form of dispute resolution in Aboriginal and Torres Strait Islander communities. By training indigenous Australians, organisations and communities benefit from a mediator who understands the local culture and perspectives.

Born in Dubbo, New South Wales, David Peachey finished his playing career in 2007 at the age of 33, having competed in an impressive 266 NRL games.  Among his many on-field achievements, David scored 117 tries, represented New South Wales in the State of Origin and won the Dally M Fullback of the Year award in 1999.

On his retirement from playing, David wasn’t ready to walk away from the game entirely. David’s off-field achievements now include acting as an Ambassador for rugby league’s One Community, a platform that utilises high profile current and former NRL players to deliver social change in the NRL community and more recently becoming a mediator.

When speaking about his involvement with ADC’s ATSI Mediation Training Scholarship Program, David said, “I’m glad I had the opportunity. [The program] can open doors for Aboriginal and Torres Strait Islanders to pursue employment as well as engage other groups in society.  It gives you the opportunity to see how other people think, get to know the other participants and use their portfolios.”

With a limited background in mediation before commencing his training, David found that he was “fully occupied,” and stated that participants should be prepared for, “an intense, but very engaging week.”

While there is a lot of material to cover and skills to learn, the program has numerous support mechanisms in place.  The coaching faculty are highly respected and nationally accredited mediators with significant experience in alternative dispute resolution in Australia and internationally.

David said, “The presenters were fantastic. They put you in a place to succeed and give you a lot of background into how mediation can be used.  There is a lot to take in but they really help, especially when you don’t go through the mediation process on a daily basis.”

David highly recommended the program to any Aboriginal and Torres Strait Islanders pursuing a career in social work or legal services.  He noted that getting involved with the program early can not only provide relevant mediation training, but also help develop skills for dealing with people in many different scenarios.

Candidates for the Scholarships Program are chosen based on their work in communities, leadership capabilities, capacity to undertake intensive mediation training, and willingness to champion mediation in their communities.